Canst thou not minister to a mind diseased,
Pluck from the memory a rooted sorrow,
Raze out the written troubles of the brain
And with some sweet oblivious antidote
Cleanse the stuff’d bosom of that perilous stuff
Which weighs upon the heart – Macbeth

This week we will mark 1 month since the decisive election on November 8th.  We are in the aftermath of Thanksgiving gatherings when the fault lines of the elections created fissures among communities, families, kin, and friends, to which the long outpourings both on and off social media testify.    Many forces of inclusion and peace are gathering but ultimately, sharp lines are being drawn.  I run into groups of students wearing safety pins and they explain that the pins indicate that they are “safe” to be approached by others — are opposed to any forces of bigotry and exclusion. As these fault lines seem intractable, I want to pause and reflect on on how and where to look for consolations in such times.

For this I want to recall the uncannily timely visit we had at Michigan State in November, a few days after the elections, of theatre director Iqbal Khan from Britain, who reminded us, importantly, of the rich consolations that can be found in the works of Shakespeare. (view the live stream of his public address at the Wharton Center on November 14, 2016 below).  He put it aptly when he said in a local newspaper, “at a time when the complexity of the world paralyzes us and our need to understand ourselves, our identity and relationships to ‘the other’ has never felt more manipulated, Shakespeare’s plays offer consolation and surprising riches.”  And what makes the works the vehicles for such a comfort and understanding?  “They dramatize the most awful things all of us are capable of while also creating characters that sound the greatest possibilities of the human imagination and compassion. They speak of families, love and governance. They explore our nightmares while celebrating the sovereignty of our reason” (Khan, Lansing State Journal).

And this journey to consolation, as he described in his lecture, comes via the repeated enactments of redemption of a broad range of characters in the plays. But how are they redeemed and how can we be redeemed –how can the world be redeemed?  Such consolations, he reminded us, have to come via an embrace of the dynamic complexity of the world in which we we live. There are no simple answers. For instance, he gave the example of the speech given by Macbeth above (“pluck from the memory…) and his poignant and tragic urging to the doctor to comfort and cure his wife, Lady Macbeth, who is suffering from the dark memories of their shared deed, the murder of the King, which Macbeth did at her urging. But can a memory of such a deed be “plucked out”?  And what “sweet oblivous antidote” could blot the human responsibility of murder?   “The play does not end well,” the director wryly recalled in his live talk, but by giving Macbeth the most profound poetic reflections on the enormity of his own deeds — on his own humanity, so to speak, we as the audience, can also recognize that despite all the horrors, “people are not intractable.”  And “our humanity is a delicate and beautiful thing.” 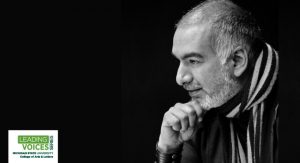 During the Q & A, one audience member asked him: and “how would Shakespeare have represented the elections?”  “He would not have changed anything” he answered.  He would not have provided any simple answers. So ultimately consolations have to be wrested from surrendering to a “place of provisional knowing.”

During the week of Iqbal Khan’s visit and reminder of the power of theatre, another theatrical event got big head lines, when a cast member (Brandon Victor Dixon) of the acclaimed musical, “Hamilton” addressed an audience member, Vice-President elect, Mike Pence from the stage where he called out: “We are the diverse Americans who are alarmed and anxious that your new administration will not protect us, our planet, our children, our parents, or defend us and uphold our inalienable rights … we hope that this show has inspired you to uphold our American values and work on behalf of all of us.” (see full clip below)

Donald Trump’s response to this episode in a series of tweets was one of being offended: “The Theater must always be a safe and special place.The cast of Hamilton was very rude last night to a very good man, Mike Pence. Apologize!

Trump was looking to the theatre to provide ease, comfort, and some “sweet oblivious antidote” that would make Pence forget the cares of governance –especially and in the aftermath of an election victory based on the demagogic divisiveness the Republican ticket unleashed.

BUT, no Mr. Trump, theatre at its best should not be a “safe place,” but rather (echoing Iqbal Khan here) it must unsettle, move, enlighten, and teach you new and surprising lessons about the possibilities of the human condition.  Theatre must hold a mirror to the world in all its uncomfortable complexities.. ONLY then can we find consolation and redemption  in it.

Mr Trump, post election, is also looking for redemption. At a visit to the New York Times editorial meeting, he was conciliatory: “I will say, The Times is, it’s a great, great American jewel. A world jewel. And I hope we can all get along well.”But in response to this assertion, noted New York Times columnist, Charles Blow responded (November 23, 2016. New York Times Op-Ed)

“I will say proudly and happily that I was not present at this meeting. The very idea of sitting across the table from a demagogue who preyed on racial, ethnic and religious hostilities and treating him with decorum and social grace fills me with disgust, to the point of overflowing. Let me tell you here where I stand on your “I hope we can all get along” plea: Never.”

Why will Blow not accept Trump’s changed position?  Everyone has the possibility of change and growth after all?   To which Blow’s characterization is as follows:  “It’s not that I don’t believe that people can change and grow. They can. But real growth comes from the accepting of responsibility and repenting of culpability. Expedient reversal isn’t growth; it’s gross.”

I think Blow’s characterization is also key to understanding theatrical redemptions and consolations in Shakespeare’s plays. We are engaged with his characters, even the most villainous ones (Richard III, Edmund, Macbeth) because they display honest psychic journeys to understand the consequences of their own actions and even express some remorse.  Mr Trump has yet to make such a journey of self-knowledge and redemption.

We are yet to find any consolations on that front as yet!